UC Berkeley Chancellor Carol T. Christ will be the keynote speaker at the GSE's Commencement ceremony on Friday, May 24, 2019, at 9:00 a.m. at Zellerbach Hall.

Christ, UC Berkeley's 11th Chancellor, is a celebrated scholar of Victorian literature, and is also well known as an advocate for quality, accessible public higher education, a proponent of the value of a broad education in the liberal arts and sciences, and a champion of women’s issues and diversity on college campuses.

Christ spent more than three decades as a professor and administrator at UC Berkeley before serving as president of Smith College, one of the country’s most 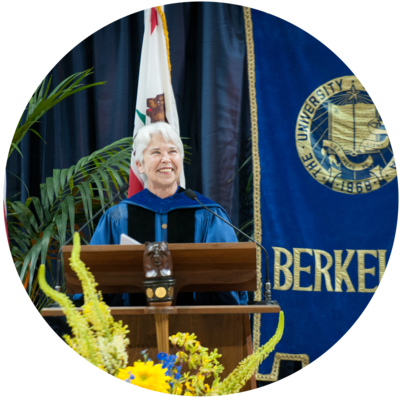 distinguished liberal arts colleges, from 2002 to 2013. She returned to Berkeley in January 2015 to direct the campus’s Center for Studies in Higher Education, and was appointed interim executive vice chancellor and provost in April 2016 before being named chancellor in March 2017. Since returning to Berkeley, Christ has played an instrumental role in efforts to stabilize the institution’s budget, confront sexual violence and sexual harassment on campus, create a long-term plan for housing students and scholars, and more.

As president of Smith for more than a decade, Christ supervised the development of the nation’s only accredited engineering program at a women’s college, oversaw a significant rise in student diversity, expanded Smith’s global activities and reach, managed a major campus capital planning program, and shepherded the college through strategic planning exercises designed to improve its academic and financial models within the context of changing trends in higher education.

Prior to joining Smith, Christ served as UC Berkeley’s executive vice chancellor and provost from 1994 until 2000. During her six years as the campus’s top academic officer, she sharpened Berkeley’s intellectual focus, strengthening many of the institution’s top-rated departments in the humanities and sciences as well as advancing major initiatives in areas including neuroscience and bioengineering.

Christ received her B.A. (1966) from Douglass College, and her M.Ph. (1969) and Ph.D. (1970) from Yale University. She joined the Berkeley English faculty in 1970, and in addition to her other roles, has served as chair of that department, dean of the Division of Humanities, and provost for the College of Letters and Science. Christ has authored two books, The Finer Optic: The Aesthetic of Particularity in Victorian Poetry (1975) and Victorian and Modern Poetics (1994), and has edited or co-edited several others, including The Norton Anthology of English Literature. She is a member of the American Academy of Arts and Sciences and the American Philosophical Society.

Christ was married for 21 years to Paul Alpers, a professor of English and founding director of UC Berkeley’s Townsend Center for the Humanities, until his death in 2013. She has two grown children, Jonathan and Elizabeth Sklute, from a previous marriage, as well as two grandchildren. She lives in Berkeley.