THIS EVENT HAS BEEN POSTPONED.

UC Berkeley officials are taking some actions designed to help limit coronavirus (COVID-19) risk on campus, including postponing or cancelling events on campus with 100 or more expected attendees. Read more.

The 2020 Annual GSE Dean’s Forum features a screening of the thought-provoking documentary The Great American Lie, followed by a discussion with filmmaker Jennifer Siebel Newsom, and a special group of panelists.

This event is free and open to the public. Due to limited seating, RSVP is required. RSVP here. Questions? Send an e-mail to gsedeanevents@berkeley.edu. 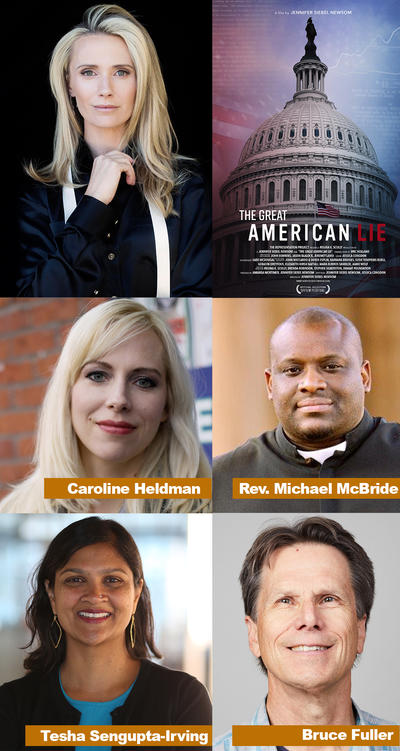 Description of the film
We are currently living in one of the greatest periods of social and economic inequality in our nation’s history. Today, the top 0.1% of Americans own as much wealth as the bottom 90%. In 2017 alone, 82% of new wealth created went to the top 1%.

Meanwhile, one in five American children and one in eight American women live in poverty – despite us being one of the wealthiest countries on earth. Increasing inequality has created deep social, economic, and political divides. Clearly the status quo is not working.

The Great American Lie exposes how America’s socio-economic inequality is rooted in our beliefs with the cultural pendulum swinging too far towards revering things we consider “masculine,” like individualism, power, and money, at the expense of things we consider “feminine,” like empathy, care, and collaboration.

Jennifer Siebel Newsom is a filmmaker, advocate, thought leader, and the First Partner of California. After graduating with honors from Stanford University and Stanford’s Graduate School of Business, she wrote, directed, and produced the 2011 award-winning documentary Miss Representation. As a result of Miss Representation’s impact, she launched The Representation Project, a nonprofit organization that uses film and media as a catalyst for cultural transformation. Her second film as a director, The Mask You Live In, explores how America’s narrow definition of masculinity is harming boys, men, and society at large. And, her third film in the trilogy, The Great American Lie, unveils the underlying cultural causes of inequality in America. She also executive produced the Emmy Award-winning and Academy Award-nominated documentary The Invisible War and was an executive producer on the Emmy Award-winning documentary The Hunting Ground.

Jennifer’s films have been seen by more than 28 million people worldwide, and The Representation Project’s social action hashtag campaigns have reached more than 650 million people. The Representation Project is responsible for single-handedly shifting the norm of sexist Super Bowl ads with the #NotBuyingIt campaign. Similarly, their #AskHerMore campaign transformed the sexist reporting on the red carpet, and empowered women in Hollywood to address inequalities in the industry, giving early momentum to the #MeToo and #TimesUp movements. Since becoming First Partner of California, Jennifer has championed various issues related to gender equity and raising healthy, whole children including the launch of her first initiative, #EqualPayCA. Jennifer lives in Sacramento, California with her husband, California Governor Gavin Newsom, and their four young children.

Dr. Caroline Heldman comes from the world of academia and non-profit management. She is a Professor of Politics at Occidental College in Los Angeles with a research specialization in media, the presidency, and systems of power (gender, race, class). She is the former Research Director of the Geena Davis Institute for Gender in Media, and she co-founded the New Orleans Women’s Shelter, the Lower Ninth Ward Living Museum, End Rape on Campus (EROC), Faculty Against Rape (FAR), and the End the Rape Statute of Limitations (ERSOL) campaign.

Dr. Heldman has published numerous articles and six books: Rethinking Madame President: Are We Ready for a Woman in the White House? (Lynne Rienner, 2007); Protest Politics in the Marketplace: Consumer Activism in the Corporate Age (Cornell University Press, 2017); Women, Power, and Politics: The Fight for Gender Equality in the United States (Oxford University Press, 2017); The New Campus Anti-Rape Movement (Lexington, 2018); Sex & Gender in the 2016 Presidential Election (Praeger,2018); and Still Waiting for Madame President (Lynne Riener, 2019). She has also been active in “real world” politics as a professional pollster, campaign manager, and political commentator for CNN, MSNBC, and FOX News.

Pastor Michael McBride (known as “Pastor Mike”) is a native of San Francisco and has been active in ministry for over 20 years. Pastor McBride's commitment to holistic ministry can be seen through his leadership roles in both the church and community organizations. A graduate of Duke University’s Divinity School, with a Master of Divinity with an emphasis in Ethics and Public Policy, Pastor McBride founded The Way Christian Center in West Berkeley, where he presently serves as the Lead Pastor.

In March 2012, he became the Director for the LIVE FREE Campaign with Faith in Action, a campaign led by hundreds of faith congregations throughout the United States committed to addressing gun violence and mass incarceration of young people of color. He is one of the national leaders in the movement to implement public health and community centered gun violence prevention programs, which have contributed in 50% reductions of gun related homicides in Oakland and many other cities across the country. He is a co-founder of Community Justice Reform Coalition and the National Black Brown Gun Violence Prevention Consortium which work to center black and brown gun violence prevention practitioners and scale up life-saving interventions related to urban and communal violence.

Regarded as a national faith leader, active in the Ferguson uprisings and many subsequent uprisings, he helps bridge, train and support millennials and religious institutions working on racial justice and black liberation. Pastor McBride has served on a number of local and national task forces with the White House and Department of Justice regarding gun violence prevention boys and men of color and police-community relationships. In 2016, he was appointed as an Advisor on President Obama’s Faith Based Advisory Council for Faith-Based and Neighborhood Partnerships. He has been a frequent contributor to The New York Times, the Washington Post, MSNBC, CNN, the Huffington Post and many other media outlets providing commentary on issues related to faith and racial justice.

He is married to Cherise McBride and they have two beautiful daughters, Sarai and Nylah.

Bruce Fuller is professor of education and public policy at UC Berkeley. His work focuses on the early learning of young children and the diverse institutions that aim to enrich their development. He was trained in the sociology of education at Stanford University. A former researcher at the World Bank, he taught at Harvard University before returning to California. Professor Fuller is author of Standardized Childhood, and Organizing Locally. He is finishing a book on the history of civic activism and school reform in Los Angeles.

Despite the decades-old legacy of activists and educators calling for a view of mathematics as a civil right, minoritized children's access to quality mathematics instruction, and opportunities to find a sense of self, agency, joy, and dignity in its pursuit, remain elusive. Indeed, neoliberal and neoconservative ideologies that treat children as human capital find a unique resting place in school mathematics to the detriment of racially and socioeconomically minoritized families. Dr. Sengupta-Irving's research on children's mathematical learning directly addresses this significant political and sociocultural problem. Through a mix of prolonged ethnographic work, teaching experiments, and microanalyses of children’s interactions, her research explores the tensions between mathematics learning as a promise of economic and political enfranchisement, and the realities of what it means to survive mathematics in and through secondary education from the perspectives of minoritized youth and the teachers who teach them. Her work advances a language and framework for teachers and researchers that reject mathematics as a stratifying project of race, class, and gender in schools.

Dr. Sengupta-Irving earned a B.S. in Electrical Engineering from the University of Illinois, Urbana-Champaign and a PhD in Mathematics Education from Stanford University. Her prior experiences as a secondary mathematics teacher in Compton (California) and her work with incarcerated youth and adults seeking a GED, greatly inform her perspectives on mathematics education in the lives of minoritized youth.