What’s happening behind the scenes is a complex data analysis that shows the effectiveness of using machine translation to examine course descriptions and historic enrollments. These analyses will serve as a tool to help students at 2-year colleges build their coursework, which will count toward their intended degree at a 4-year university.

Just ask Alexandra W. Logue, former Executive Vice Chancellor and University Provost of The City University of New York (2008-2014), who wrote a book on the topic, Pathways to reform: Credits and conflict at The City University of New York. At many universities, decisions about course articulation can come down to a single faculty member, Logue said, and virtually all course articulation decisions involve some sort of faculty input. “Zach’s work is the first time that I know where there's been an opportunity to assess whether two courses are similar enough that the credits should transfer other than employing current faculty judgments,” she said. “This is another tool that we could use that would give at least a method that does not involve time-consuming current faculty work.”

Pardos’s research could have huge implications for transfer students. According to national statistics, 81.4% of community college students want to transfer to a 4-year institution but after six years of starting at the community college, only 13% earn a 4-year degree.

While there are many factors impacting a transfer student’s post-secondary education, insufficient course articulation is considered a significant obstacle toward degree completion. 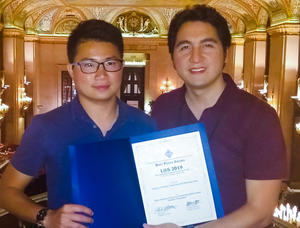 Pardos’s team used different methods for comparing courses and tested them against a validation set (existing course articulations that have already been in use). Interestingly, they found that the set of students who took a course, observed from years of historic enrollments, said something about the course that was useful for conducting the comparison. Using the courses’ catalog descriptions, combined with enrollment-based features (data largely generated by means of prior faculty decisions), produced the most accurate course articulations.

This best performing method showed that if the model were to produce a set of five community college course articulation suggestions for each one of 10 chosen Berkeley courses, eight of those sets of 10 suggestions can be expected to contain an appropriate articulation course.

“I see it as a social justice issue, frankly,” said Gilkerson, adding that big data can help illuminate successful pathways that students with social capital have already accessed. “I really think about it from the lens of how do we leverage this data to find these interesting solutions, and be fundamentally thoughtful about the way the data is used. I think it could really change outcomes for communities.”

The impact of this work will soon expand. The Heckscher Foundation for Children is funding a course articulation effort that began this summer with Ithaka S+R in collaboration with Pardos’s lab and The City University of New York (CUNY) system.