By Dara A. Tom

IN THE EARLY GRADE SCHOOL YEARS, MATH IS DESIGNED to be taught with colorful manipulatives (wooden blocks, magnets, etc.), puzzles, and games. Around 3rd grade, for too many students, it becomes drudgery, and labels such as being “good” or “bad” take hold. The rest is history. 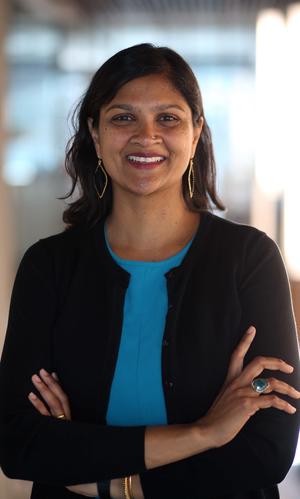 But it doesn’t have to be that way, says Professor Tesha Sengupta-Irving, a mathematics education researcher and one of two new GSE faculty members this year. Her appointment started July 1.

“You’re not innately good at mathematics, or innately loving of it,” Sengupta-Irving said. “All of us know, in mind and body, that to endure something like mathis not the same as to enjoy it. As educators raising the next generation of youth who we hope will out-create, out-innovate, and out-imagine us, asking them to endure mathematics learning – or really anything, in school – seems patently misguided at best, and inhumane at worst.”

For Sengupta-Irving, whose first career was as an electrical engineer, mathematics isn’t just about numbers, but bringing understanding around the multiple layers of the discipline for teachers, and students who are learning it. “I refute many of the dominant discourses about why kids should do mathematics or who can be good at mathematics, and try really hard to get closer to the narrative that kids bring, understand why they do what they do, in the hopes of changing the rubric of mathematics education more broadly.”

She’s up against decades of engrained thinking that strength (or weakness) in mathematics is a measure of intelligence and knowledge. Her research works to peel away this political legacy of mathematics education that is enmeshed with racism, classism and sexism.

“The launch of Sputnik in 1957 anointed mathematics and science in a way that made it inextricably tied to our global competitiveness and our ability to flex muscles on a global scale,” Sengupta-Irving said. “One’s ability to do well in mathematics ascribes respect, worthiness, and `smartness’ when none of those things should actually be ascribed to a person just based on their fluency in mathematics.”

Consider, for example, that while the Common Core Standards have eight mathematical practice standards, problem-posing isn’t one of them. “Yet posing a problem, an interesting and challenging problem to pursue mathematically, is exactly what mathematicians are often embedded in as a practice,” she noted.

“We don’t ask kids to do that in school – pose a problem and then talk about it. We rarely ask them to be the authors of the disciplines. We ask them only to consume it. And I think that subjugated position of consumption, especially when what you’re consuming feels racially apart, gender-wise apart, or class apart, becomes unbearable.” Combine that with what has become the discipline’s role in workforce preparation (learning mathematics as an investment in children who are human capital for the labor market) and the result for too many students is an excruciating experience of the discipline. “Mathematics itself can be something meaningful right now – in the now – meaning, for who the students are, and are becoming, in this moment,” she said, adding that framing mathematics education in this way can make learning feel relevant and consequential to youth.

She knows it’s possible to do this because she grew up enjoying mathematics, with teachers who would sing in class, were self-deprecating, or used humor in showing its beauty and relevance in shaping our social worlds. The daughter of college educated Indian immigrants, she also acknowledges her privileged upbringing in coming to see mathematics as something she could do and pursue. Perhaps that is what allows her to imagine an alternative for students in schools where such a future is made just beyond reach. “I know that the way mathematics is experienced in many schools is as a weapon against minoritized children, for example through tracking and testing, and that is doing material and real violence to people, their families, and their communities,” Sengupta-Irving said.

“The structural and interpersonal violence of mathematics is a human creation. If we can figure out how to get it right, and by right I mean rewrite the ways in which children experience the discipline, my hope is that more children will be describing it as joyful, and as expressing their desires, not just something to endure to get a good job.” Her views on mathematics education didn’t start out this way. She was raised hearing the dominant narrative that mastery of the hard skills (mathematics, science, engineering) is the way a person secures their position in the United States, especially women. So, she studied engineering and went on to work in industry.

Her thinking began to shift while working as a tutor with incarcerated youth and adults who were working on their GEDs. 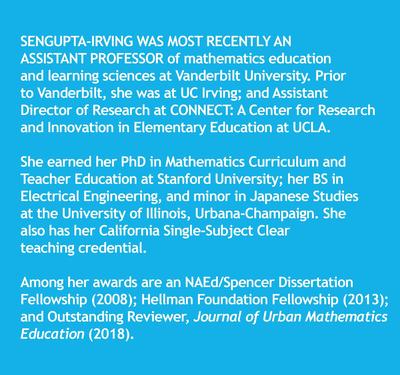 “I was with people who were motivated to do particular things with their lives, who saw mathematics as either an obstacle to that, or as a facilitator of that, and suddenly everything changed for me in terms of my relationship to the discipline,” she said. “I could see the political, economic, and social reality of mathematics from the perspective of people who were trying to master it enough to get to that next level of whatever they wanted for themselves and their families.”

In her ethnographic microanalytic work, she has shown how children embody perseverance as a collective enterprise, and how having agency over one's inquiry - in nature and purpose - better enlivens a child's sense of self and new possibilities in learning. Additionally, in a recent paper with a colleague at Northwestern University (Shirin Vossoughi), she found immigrant girls of color embodying and talking about respect, dignity, and family in mathematics learning. They were describing disciplinary learning in a way that is wholly apart from neoliberal discourses that place a premium on competition, individualism, future marketability, efficiency and speed in mathematics learning.

“There is a language for learning and design still to be read from the bodies and experiences of minoritized children,” Sengupta-Irving said. “If we could capture that with more intention, that would improve mathematics education in public schools far beyond where it stands today.”