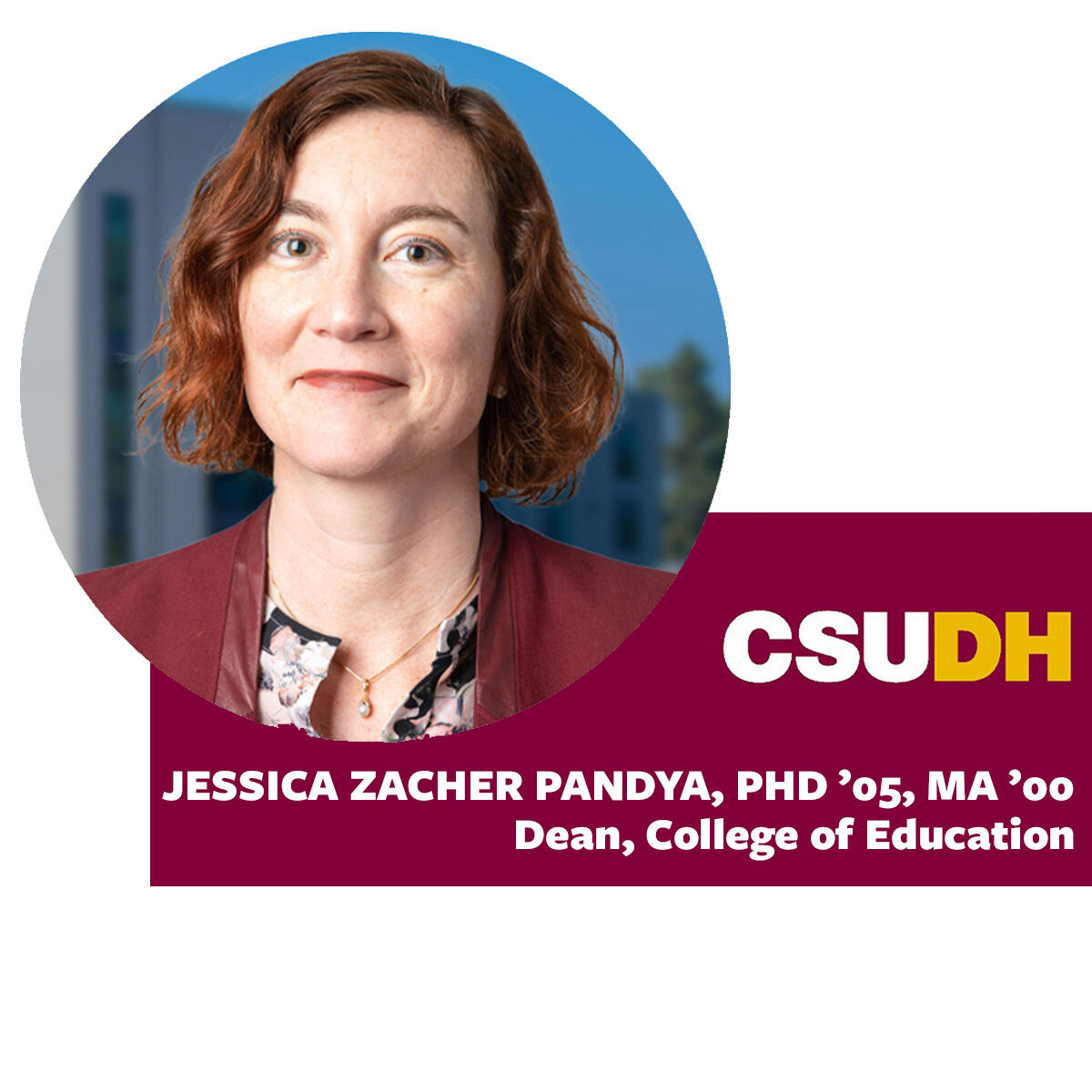 Jessica Zacher Pandya began her education career teaching kindergarten, language arts, and was a master teacher. After earning her PhD, she began teaching at Cal State Long Beach, where she spent 15 years in the Department of Teacher Education and Liberal Studies. She held many leadership and administrative positions while at CSULB, most recently chair of the Academic Senate (2019-21) and chair of the Department of Liberal Studies (2014-20). She also served as chair of the College of Education Faculty Council; chair of the Faculty Advisory Committee; and co-chair of the Highly Valued Degree Initiative Communications Taskforce.

What is it about a Deanship that attracted you to the position?

I had been at Cal State Long Beach since 2005 when I graduated from Berkeley. I went there because I wanted to be involved in teacher education. I think there used to be a bit of prejudice that the CSU would be difficult for those who wanted to do research. I came in thinking I’d be able to do the research I wanted to do and teach the students I want to teach.

I did one project on my own, and then the next project I scaled up and I invited several students in. The CSU also has more service components than UC’s often do. It turned out I like knowing how things work and I like knowing where the problems are. I became a department chair and found that there was scope to build. We created a minor in educational justice and equity.

I spent two years as the Academic Senate Chair at Cal State Long Beach with administrators, faculty, staff and students; and I had been the vice chair for three years before that. I began to see even more how institutions run and what I would do differently. I started keeping a list: If I were the dean, I would do that or I would try this. Or this is what I would say if I were in that position.

The mission of the CSU is in general to educate first generation students, and increasingly, graduate students faster; these different visions of the CSU appeal to me. When I saw the job at Dominguez Hills, I was very excited because their vision and mission are really focused on equity and change.

It’s a place where there's lots of student diversity and faculty diversity, which I like. So I said to myself, if I wanted to be a dean, if I was interested in leading change, that would be a place I'd want to do it.

The most recent thing I did as a researcher is co-create the Transnational Critical Literacy Network that I started with four colleagues, one also at Cal State Long Beach, one at Columbia (Earl Moore), a woman in Queensland University of Technology in Australia, Jennifer Alford, and Roberto Santiago de Roock at UC Santa Cruz.

So we were all over the world and we were talking about critical literacy. One of the projects that came out of that is a handbook that's coming out in September and it's got 50 chapters, and over 100 authors, because we said no chapter could be sole-authored, and we tried to make sure that authors were diverse across international lines, or demographics, or institutions so that people had to write with strangers.

And it's both about past trends and critical literacy and then what critical literacy looks like in different places around the world. I wrote the chapter on the U.S. with Cheryl McLean at Rutgers, and Cynthia Lewis at UC Santa Cruz. It is a massive project.

As a professor in the CSU, you find ways to do this fun, collaborative work. When I took on the deanship, I didn’t think my research life was over. I think I'll probably spend the next few years supporting young faculty in research here at Dominguez Hills.

There's a lot of work to be done around supporting pre-service teachers, especially teachers of color, improving teacher pipelines.

What is your vision for your College of Education?

The interesting thing in California is the high need areas are dual language teachers, special education teachers, and math teachers. One of the faculty members at Dominguez Hills is Kamal Hamdan, and he runs the Center for Innovation and STEM Education. He supports interns and he pays students to do the fieldwork and his programs are pretty robust. I’m trying to mirror his work in other fields.

I'm looking forward to learning more about, and meeting, my local school district partners and finding out where the needs are.

With the faculty and student diversity at Dominguez Hills, leading in this era of COVID and racial reckoning is a deep issue for you, maybe more so than for others?

I’m very aware of my whiteness, and the privileges and responsibilities I have as a white woman in higher ed and in Colleges of Education. Each CSU campus is quite distinct; one of the distinctions of DH is that it is a majority minority faculty, unlike some other CSUs. I like working in diverse environments and I don't want to work with people who are all like me or look like me—and there is lots of work for all of us at Dominguez Hills to do in the service of racial equity.

We have many African-American students, first-generation students, and a growing Samoan student population. Our Education faculty have spent the past two years creating the Justice and Equity Collaborative. They were working on equity issues pre-COVID, before the murder of George Floyd.

That was one of the things that intrigued me as a Dean interviewee because they were already working on justice and equity at the faculty level. They were helping programs do equity audits of their coursework, as well as theoretical visioning. I've been here just four weeks, so I'm asking the collaborative, how the college, and how I, can support the work and support them.

There is a vision and a mission that the collaborative created and my job is to turn it into a strategic plan, saying this is what we value, here’s what we’re going to do about it.

I would also say that the faculty, students and staff of Dominguez Hills have suffered a lot during COVID. Lots and lots of people lost a close family member, or were sick. Our area has a slightly lower vaccination rate than other parts of L.A. I think people are exhausted. You can't just keep doing and doing and doing, so we're going to take a year and also just recover a little.

How did your experience at the GSE prepared you for your current role, and what theories and practices do you still use today?

My adviser Anne Haas Dyson when I was first at Berkeley taught me to really revel in the joy of children and children's writing and communicating. Anne was endlessly fascinated with how kids make sense of the world. And I mean, I probably was, too. She reminded me that that was a professional thing you could do: you could spend your adult life not only listening to children and watching them and seeing what they write and say, but that you could be theoretically rigorous and grounded, and also feel the joy in children's worlds.

Glynda Hull showed me how to be respectful of adults and adult learners. In my later work, there are echoes some of the adolescent work, but Glynda taught me to respect where people come from and to listen very carefully to what community organizations need so we're not just doing research to do it; we're not just doing it about them, but we're doing it with them.

I worked with David Pearson as a researcher and learned a lot from him, too, and he has a great respect for teachers. He had a much bigger sense of this larger literacy-oriented professional development, what it should look like, how it should be.

Also I worked with the late Allan Pred, who was in the geography department. He taught me to think outside of my theoretical comfort zone and he really pushed me. He would say, “What do all of these literacy theories mean in relation to larger theoretical questions? What's your bigger argument? What are you saying that nobody has seen before?”

Intellectual rigor is a good thing to have as a dean, so you don't sit around and say, “Oh, that's a good idea.” But you say, “how is this project going to help further our work here?”

My training at Berkeley certainly enabled me to have that whole first 15-16 years of my career be very robust. I think you just don't know necessarily when you start out along that path, you don't know what you want to do. I don't think when I was a young professor, I was thinking about being a dean.

But you never know. You might find yourself caring about how decisions are made. And once you start caring about that, and asking who's in charge, and who's making decisions, watch out. It won't be long before you want to be the one doing it.