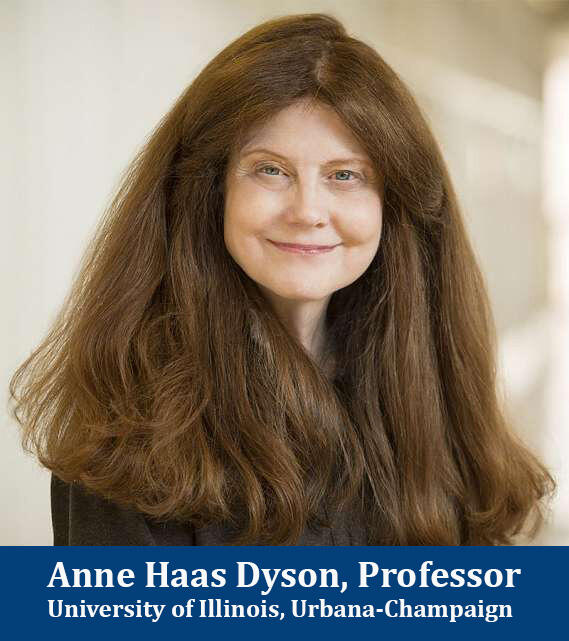 Catherine Park, a GSE doctoral candidate in the Critical Studies of Race, Class, and Gender cluster, served as moderator.

"Are You Hot Lunch?" Literacy, Equity, and Belonging in Peer Worlds

Her talk weaves in two perspectives: her own as a researcher seeking to understand a child’s world and that of a young Black child, Ta’Von, whom she accompanied for four years. During that time, Ta’Von transitioned from a much-loved interracial preschool, serving mainly low-income children, to a much more adult-regulated, test-focused, majority-white elementary school in an economically comfortable neighborhood.

Dyson probes these academic and literacy contexts (including societal and institutional ideologies, policies, and practices) and their consequences for how—or if—children truly see each other in their peer worlds. The borders between these worlds—textured with socioeconomic, cultural, and gender variations—affect a child’s opportunity to learn and, moreover, to be and feel respected.

Anne Haas Dyson, of the University of Illinois at Urbana-Champaign, is a former teacher of young children and a fellow of the American Educational Research Association.

Among her previous appointments was as a longtime professor at UC Berkeley, where she received the campus-wide Distinguished Teaching Award. She has spent more than 40 years studying the childhood cultures and literacy learning of young schoolchildren, for which she has received numerous awards.

Dyson aims, first, to bring respect and intellectual attention to childhood cultures and their relationship to school learning. Young children do not participate in school because they are concerned about the national economy, international competition, or climbing a ladder to academic accolades from a grateful nation. They desire to make sense of their world and to gain companionship in what can be a confusing world.

Second, she aims to document the diversity of resources (languages, popular culture texts, semiotic tools, everyday experiences) our diverse school children bring with them with which to participate intellectually and socially in school, especially in written language development.

Among her most recent publications are two that were Spencer-funded: ReWRITING the basics: Literacy learning in children’s cultures (2013); Child cultures, schooling, and literacy: Global perspectives on children composing their lives (2016); and Writing the school house blues: Literacy, equity, and belonging in a child’s early schooling (2021).

Background on the Waves of Influence. As new educational research theories are developed, and new contributions are made, the wave of the GSE’s influence grows. The goal of this lecture series is to link those who are new to research with their intellectual ancestors, as well as create and strengthen linkages with ongoing research efforts. For Dr. Judith L. Green, whose generosity supports this lecture series, those who helped push forward her own scholarship include John Gumperz; Robert Ruddell; Paul Ammon; Millie Almy; Hermine Marshall; Rob Tierney; Jenny Cook-Gumperz; Lilly Wong Fillmore; Carl Frederikse; and Leonard Marasciulo, to name a few. Speakers who are invited to give the Waves of Influence lecture are considered critical to the GSE’s efforts to develop new perspectives on educational equity, social justice, opportunities for learning, and disciplinary understandings.

The Waves of Influence Lecture Series is made possible by the support and sponsorship of Dr. Judith L. Green, BA History '63, Multi-subject Teaching Credential '63, PhD Education '77. We thank Judith for her commitment to the Berkeley GSE and vision for fostering an intergenerational community of inquiry across students, faculty, and alumni.

For more information about the lecture series, send an email to gsenews@berkeley.edu.