Dean's Forum: Stamped From the Beginning

In the year that we commemorate the 400th anniversary of the beginning of African enslavement in U.S. history, the annual Graduate School of Education Dean’s Forum will feature Dr. Ibram X. Kendi, New York Times best-selling author, and 2016 National Book Award Winner in Nonfiction, Professor of History and International Relations, and the Founding Director of the Antiracist Research and Policy Center at American University. 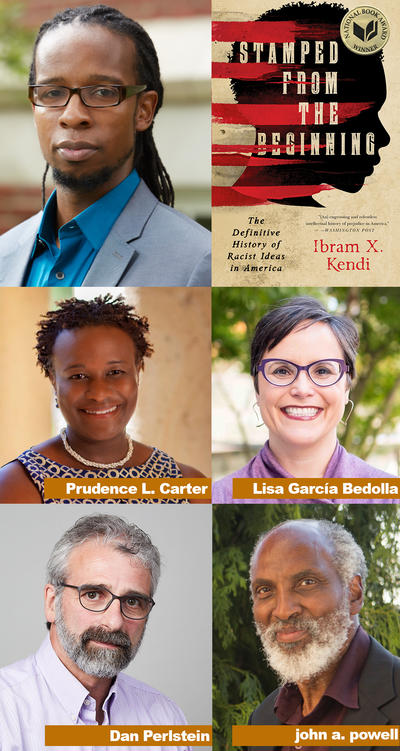 Kendi was the featured speaker in a talk on March 6 that drew on his research and arguments from his award-winning book, Stamped From the Beginning: The Definitive History of Racist Ideas in America, and his upcoming book, How To Be An Anti-Racist.

After his talk, Kendi was joined in conversation by john a. powell, Professor of Law and African American and Ethnic Studies and Director of the Haas Institute for a Fair and Inclusive Society (HIFIS); Lisa García Bedolla, GSE Professor and Director of the Institute for Government Studies; and Daniel Perlstein, GSE Professor and education historian. GSE Dean Prudence L. Carter moderated the discussion. Read a transcript and watch a video of the discussion here.

This event was cosponsored by the Haas Institute for a Fair and Inclusive Society (HIFIS); and the Department of African American Studies.

Kendi has published numerous academic essays as well as op-eds in publications such as The New York Times; The Huffington Post; Salon; and The Chronicle of Higher Education. He is also the author of the award-winning book, The Black Campus Movement: Black Students and the Racial Reconstitution of Higher Education, 1965-1972. In 2018, he was named a columnist for a new vertical of The Atlantic focusing on ideas, opinion, and political and cultural commentary. He is currently working on a book with One World/Random House, How to Be an Antiracist: A Memoir of My Journey.

Dean Carter’s expertise ranges from issues of youth identity and race, class, and gender, urban poverty, social and cultural inequality, the sociology of education and mixed research methods. Specifically, she examines academic and mobility differences shaped by the effects of race, ethnicity, class, and gender.Dean Carter earned a Master of Philosophy and Ph.D. in Sociology from Columbia University. Before being appointed Dean at Berkeley, she was the Jacks Family Professor of Education and Professor of Sociology (by courtesy) at Stanford University. Her books include the award-winning, Keepin’ It Real: School Success beyond Black and White (Oxford University Press, 2005). Among her professional affiliations, she is an elected a member of the National Academy of Education; the Sociological Research Association; and a Fellow of the American Educational Research Association (AERA).

Professor García Bedolla uses the tools of social science to reveal the causes of political and economic inequalities in the United States. She has published four books and dozens of research articles, earning five national book awards and numerous other awards. She has consulted for presidential campaigns and statewide ballot efforts and has partnered with over a dozen community organizations working to empower low-income communities of color. Through those partnerships, she has developed a set of best practices for engaging and mobilizing voters in these communities, becoming one of the nation’s foremost experts on political engagement within communities of color.

Professor García Bedolla earned her Ph.D. in political science from Yale University and her B.A. in Latin American Studies and Comparative Literature from UC Berkeley.

A former New York City high school teacher and union activist, historian Perlstein teaches in Critical Studies of Race, Class, and Gender Cluster. His book, Justice, Justice: School Politics and the Eclipse of Liberalism, explores the history of race and class conflicts in American education. He has also written on the educational vision of the African American freedom struggle, representations of education in literature and popular culture, gender, violence and punishment in schools, and teacher unionism. This work has appeared in such academic journals as Teachers College; Record; The History of Education Quarterly; The American Educational Research Journal; and Educational Leadership; and in such activist publications as Rethinking Schools, and Putting the Movement Back Into Civil Rights Teaching. Current projects examine settler colonialism in American education and the educational ideas of the Harlem Renaissance.

john was previously the Executive Director at the Kirwan Institute for the Study of Race and Ethnicity at the Ohio State University, and the Institute for Race and Poverty at the University of Minnesota. Prior to that, john was the National Legal Director of the American Civil Liberties Union. He is a co-founder of the Poverty & Race Research Action Council, and serves on the boards of several national and international organizations. john led the development of an “opportunity-based” model that connects affordable housing to education, health, health care, and employment, and is well-known for his work developing the frameworks of “targeted universalism” and “othering and belonging” to effect equity-based interventions. john has taught at numerous law schools including Harvard University and Columbia University. His latest book is Racing to Justice: Transforming our Concepts of Self and Other to Build an Inclusive Society.