Math at Your Fingertips

An internet search for “math manipulatives” turns up 19.6 million results in a little more than a half second. Kits containing plastic beads, coins and animal shapes; flash cards; and wooden blocks in a rainbow of colors range from $29.49 to more than $300.

For César Botetano, a GSE collaborating scholar from Lima, Peru, the best math manipulatives are free, and right at our fingertips. Literally.

“Every child in general likes math at the beginning, but there’s a breaking point when they are taught to learn multiplication facts by memory,” Botetano said. “That’s the first rejection of math because it’s not the easiest or most natural way to teach it.”

He has developed an engaging method using hands that has children learning to carry out arithmetic operations in just a few lessons, and what’s more, they’re having fun doing it.

Taking a close look at a human hand, each of our digits are conveniently delineated into three sections. Include the thumb, as though it, too, has three sections, and the Botetano Method has children multiplying up to 100.

“I think it works because we work with the two hemispheres of the brain. First, we try to touch not the logical, but the intuitive, the feelings, the senses, the imagination,” he said. “After that, then you join with the logical part of the brain. You coordinate both sides, and then the sky’s the limit.”

Botetano is the first to acknowledge he isn’t an educational researcher and his observations with teachers in Mexico, Bolivia, and Peru of more than 8,000 children being taught the Botetano Method are just that – observations. But those observations were enough to pique the curiosity of  Professor Dor Abrahamson, who invited Botetano to collaborate with the Embodied Design Research Laboratory, a design-based research lab focused on studying mathematical cognition and instruction by creating and evaluating theory-driven educational innovation using both traditional and cutting-edge media.

FIG. 1: Note the phalanxes. Each phalanx is worth 1. (We will consider the thumb as having three phalanxes, even though anatomically there are only two.) There are 15 phalanxes in one hand and 15 in the other, for a total of 30.

Over the years, Botetano has worked with teachers in both cities and rural and extremely impoverished areas where children may be struggling with food security and lack easy access to potable water or electricity. One interesting observation: he noticed rural students learn his method faster than urban students.

“The important thing is that children use their bodies to learn. The kids from the rural areas have more physical touch with things because they don’t have electronics or toys bought from a store. You reach them in a language that they use in their daily life,” Botetano said.

Digging into the research on why the Botetano Method works, and how much of the mathematical concepts students are learning (ie, What do they understand about numbers?), is a unique opportunity for the EDRL. Often, GSE students research a theory and then build a tool or resource that can be used in practice. Botetano has flipped the script, practicing his method for 20+ years yet only now exploring how and why it works.

“I am impressed by Cesar's heroic efforts to serve the most impoverished and vulnerable citizens of his country. I trust his pedagogical intuition, and I am stimulated both to evaluate his method empirically and to make sense of its success theoretically,” Abrahamson said.

There is still tension among educational researchers, Abrahamson points out, between those who believe that mathematics learning is best served through symbolic representations, and those who insist that the meaning of these symbols must be grounded in natural ways of interacting with the world through the senses and our actions.

“As such, Botetano’s finger techniques are often regarded as party tricks, curiosities from obscure times and places, which one would never actually use in practice, such as at the supermarket,” Abrahamson said.

But developing a sense of mathematics and numbers early on can lay the foundation for deeper and stronger learning in the future.

“What César does is invent and develop these methods explicitly; argue for their developmental and pedagogical value; and tie them directly into the standards-based curriculum,” Abrahamson said. “I wish to use César’s living example as a means of challenging, or at least revisiting, common assumptions in my field.”

Ultimately, the goal is for children to be successful by developing normative ways of engaging in mathematical practices, both Botetano and Abrahamson agree.

“So we are not looking to create some kind of false utopian, body-only learning. It’s not about that,” Abrahamson said. “But it's about being open to understanding what it is about the hands that we’re missing out on when we rush kids into symbols.”

Indigenous children learn to multiply up to 20 with Botetano Method 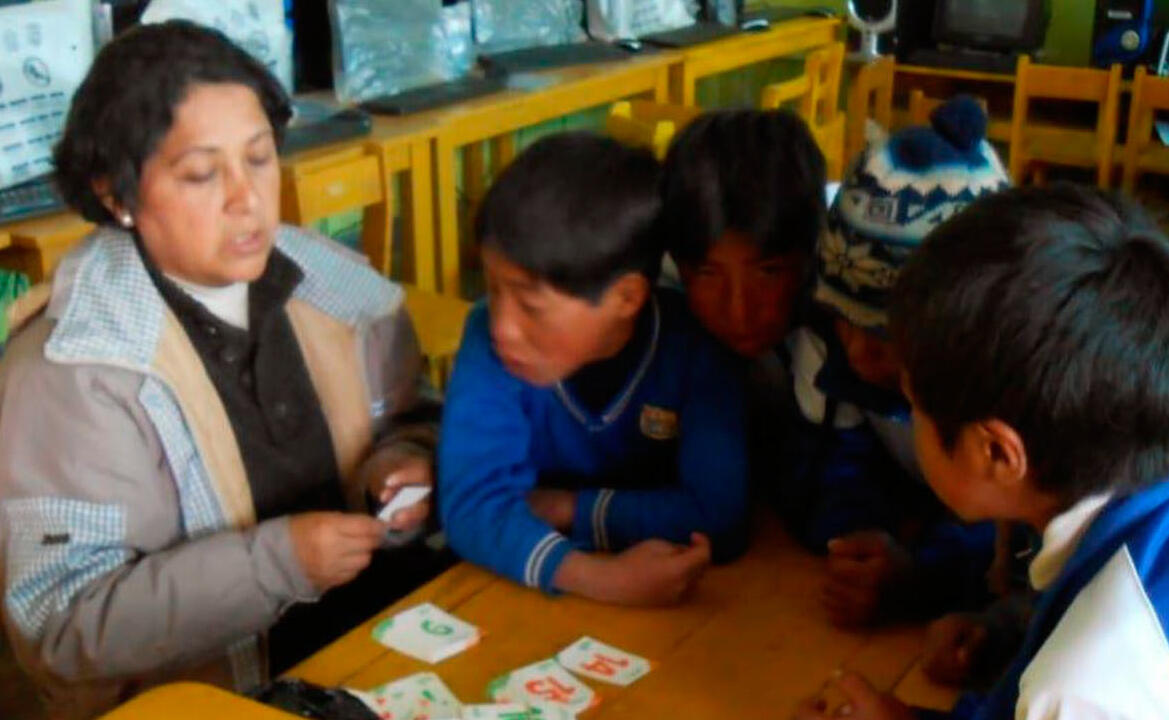 The idea that necessity is the mother of all invention couldn’t ring any truer for César Botetano, a psychologist and self-described lover of literature who has been for the past 20 years advocating for a different way of teaching mathematics in Peru, Mexico, and Bolivia.

When his then 8-year-old son Rodrigo was struggling with mathematics, Botetano began researching different ways to teach him besides rote memorization. Through his own trial and error, Botetano discovered he could teach Rodrigo addition, subtraction, and multiplication using his fingers.

Once Rodrigo grasped the concepts and gained confidence as a mathematical thinker, Botetano no longer needed to help. A few years later, Rodrigo suggested to his father that he help other students who were struggling with math.

“That’s when I started working with impoverished children. My work has been going on for more than 20 years,” said Botetano, whose passion for helping students learn math has taken him to Cusco, Peru (about 685 miles southeast of Lima); Bolivia; and Mexico.

The COVID-19 pandemic provided an opportunity to try the Botetano Method with students in an online setting, although it was limited because only students who had internet access were able to participate. With seven students in Mexico, ages 6 and 7, the teacher used the Botetano Method via Zoom, along with the support of Dr. Hector Rosario, a Courtesy Professor at the University of Florida and former professor at the University of Puerto Rico at Mayagüez.

The children selected for the pilot research study had average academic abilities, and moderate to low participation in class. The teacher noticed marked improvement in the students’ mathematical thinking, as well as increased confidence in other academic subjects. Students who previously wouldn’t turn on their microphone nor raise their hand to answer questions were excited about learning by the eighth lesson of the Botetano Method.

“Math is always a challenging subject and this gives them the confidence to feel better about themselves in terms of their academic and social environments,” Miriam Rosas, a teacher said in a post-study interview. “This is very positive. They feel that they’re capable.”

Encouraged by the pilot, Botetano hopes to expand to a larger group of students. He is motivated in part by the fact that even as Peru has increased investment in education, according to the Organisation for Economic Co-operation and Development’s (OECD) Programme for International Student Assessment (PISA) scores, the country has shown only modest improvements in math scores.

Botetano’s research into the theoretical aspects of his method hasn’t diverted his attention away from his primary goal: sharing his method with teachers, and governmental education offices.

“Children are marvelous learners. They do not fail. What fails is the method. If we want students to succeed in mathematics, we must make a mathematics curriculum that nurtures their minds,” he said.