Students from low-income families are increasingly isolated in the nation’s schools, complicating efforts to remedy ‘learning loss’ during the pandemic, study finds 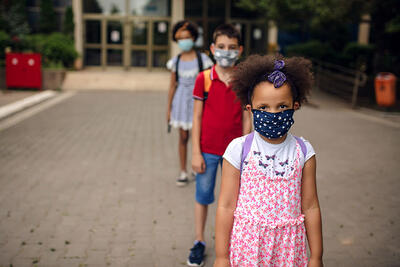 This worsening segregation of children by economic class stems from climbing Latino enrollments, uneven levels of “white flight” from many school districts, and parents with financial resources moving farther from people living in poverty, say researchers at the University of California, Berkeley, and University of Maryland.

“The growing segregation of the haves and have-nots over the past two decades makes it more difficult to narrow widening racial gaps in student learning seen during the COVID era,” said Bruce Fuller, Berkeley professor and director of the new study. “As educators and policy makers help families recover from the pandemic, they must recognize this deep-seated shift in American society—the isolation of children who start-out way behind.”

Researchers tracked trends across more than 14,000 school districts nationwide and found that children of color and from low-income households attended schools with a diminishing number of predominantly white, middle-class peers.

In 2000, the average child from a family living below the poverty line attended an elementary school where 45 percent of those enrolled were children from families defined as middle class. By 2015, that figure fell to 36 percent nationwide. Children from Latino families living in poverty were hit especially hard, researchers said, in both urban and suburban areas, where they grew increasingly isolated from white peers from middle-income families.

At the same time, educators in several metropolitan areas were able to improve the integration of children from poorer families who are schooled with a rising share of peers from middle class families.

Earlier research shows that children from low-income families markedly benefit when attending the same classrooms of peers from middle class families. Yet, disparities in student learning had begun to widen even before the pandemic, national test scores have revealed.

The study—“Variation in the Local Segregation of Latino Children—Role of Place, Poverty, and Culture”—published this week in the American Journal of Education from the University of Chicago Press, highlights what gave rise to worsening segregation, describing the demographic and economic forces at play among the nation’s elementary schools between 2000 and 2015. The study focused on trends in Latino and white enrollment, along the variable isolation of students according to economic status, in districts across the country.

Lead author:  Bruce Fuller is a sociologist at the University of California, Berkeley, Graduate School of Education, who studies institutions, large and small, that attempt to nurture children. He is author of When Schools Work (Johns Hopkins).

Communications Director Andrea Lampros can be reached at (510) 847-4469 or alampros@Berkeley.edu.